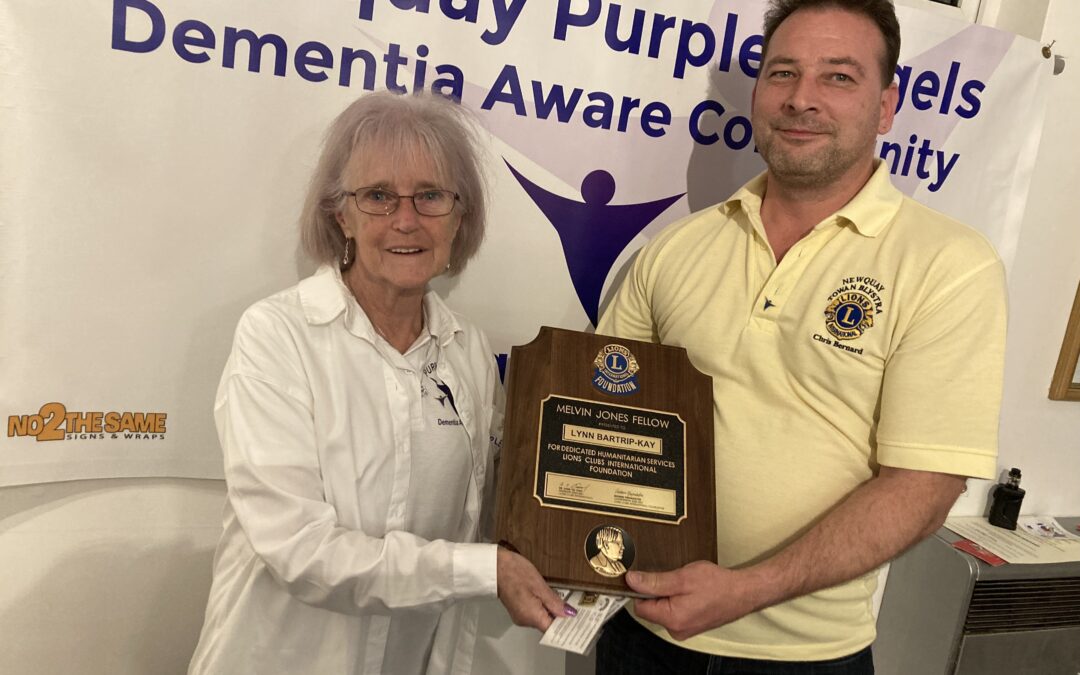 Lion Lynn Bartrip-Kay, the founder of the Newquay branch of Purple Angels, was taken aback after she had delivered a dementia awareness course for members of Newquay Towan Blystra Lions Club last week.
At the conclusion of the session, held at Newquay’s Royal British Legion Club, former club president, Lion Chris Bernard, rose to thank Lynn for her time and commitment to the Lions and Purple Angels causes. But, he then presented her with a Lions Clubs International Foundation Melvin Jones Fellowship, the highest award which can be given by a Lions Club in acknowledgement of dedication to humanitarian services.
Lynn, who has been a Lions Club member in both Towan Blystra and Newquay Lions during the last 13 years, was visibly delighted and humbled by the surprise award and thanked Towan Blystra Lions Club members for their support.
“I was blown away by this award,” said Lynn, who, in addition to leading Purple Angels activities, cares for her former husband who has advanced dementia.
“I was shocked and humbled, and didn’t have a clue what was happening. It was such a surprise to be presented this and so lovely to be with so many fellow Lions to share the moment. The Melvin Jones Fellowship Award is one which I will treasure always.”
Chris Bernard, who presented the award said: “There is no question of how deserving Lynn is of this award. Whilst she has dedicated so much of her time to the cause of understanding and fighting dementia, which is clearly very close to her personally, she has supported many other initiatives which have raised tens of thousands of pounds to support good causes, which the Lions have progressed over many years.”
Melvin Jones founded the first Lions Club in Chicago in 1917 and said at that time: “You can’t get very far until you start doing something for somebody else.” Based on that principle, the Lions Clubs’ motto ‘We Serve’ emerged and is now proudly upheld by over 1.4 millions members, worldwide.
To find out more about Purple Angels please visit www.newquaypurpleangels.com and to visit/find out more about what you could do to support or join the Lions: www.newquaytowanblystralions.org.uk.