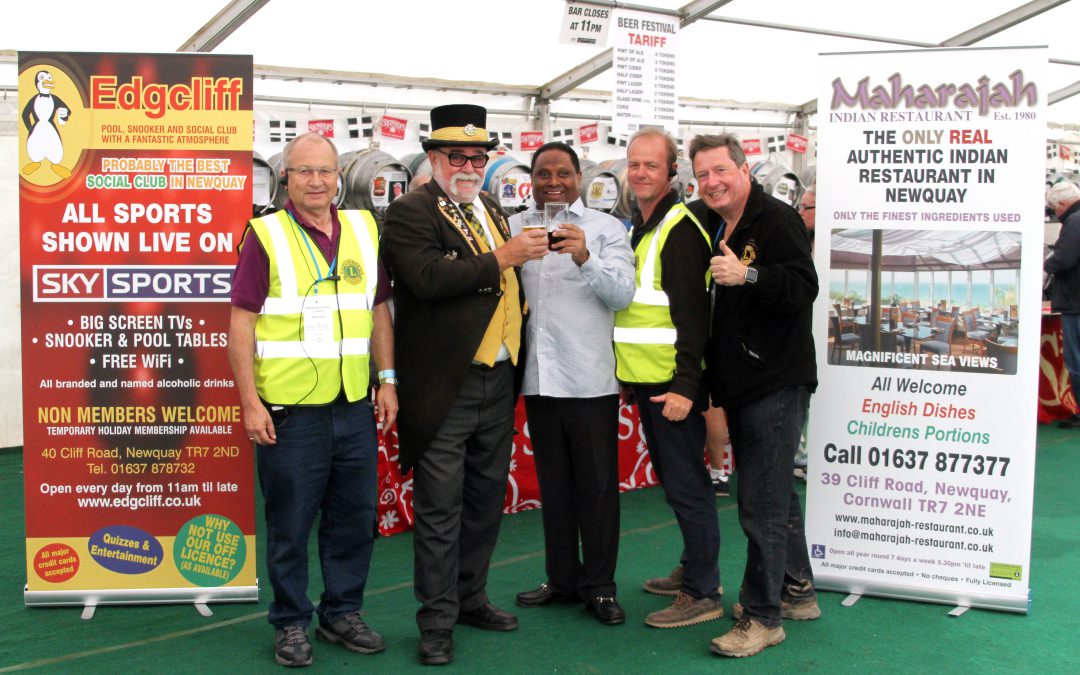 Newquay Beer Festival made a triumphant return for it’s fifth year, where happy beer and cider enthusiasts raised a glass to help raise thousands of pounds for local good causes.

Organised by Newquay Towan Blystra Lions Club, the event took place over the weekend of 22-24 September at Hendra Holiday Park in Newquay. It boasted over 70 beers and ciders combined with great entertainment on the main stage.

The event was organised and run completely by volunteers, with every penny of profit going to support local good causes. It’s estimated at least 1,200 people enjoyed the festival across the weekend, with camping and pre-event ticket bookings up significantly on last year.

Matt Bunt from Newquay Towan Blystra Lions said: “Newquay Beer Festival continues to grow and secure it’s reputation as one of the friendliest beer festivals around. The feedback we’ve had is that it’s a friendly and relaxed atmosphere, and this has helped us attract people from across both the UK and Cornwall. We saw lots of familiar faces returning, some for their fifth year.”

The beers and ciders weren’t the only attraction, with dozens of bands and local acts entertaining the crowds on the main stage.

“Thank you to every act, all of whom gave their time for free and offered a good selection of styles as the soundtrack to the weekend.” Matt added.

“We must say a heartfelt ‘thank you’ to all our supporters, without whom this event could not go ahead including our headline sponsors The Maharajah Indian Restaurant, Impact Sound and Light and Hendra Holiday Park. The beers and ciders were sponsored by local businesses and individuals too, and we’re grateful for their support.”

Newquay Towan Blystra Lions are a group of volunteers who strive to support local organisations, groups and individuals in Newquay and the surrounding areas. The members pay to run the club themselves, which means that every penny raised without exception goes straight to these good causes.

Matt continued: “As well as members of our club, we were joined by numerous volunteers over the weekend who worked very hard and again, we’d like to thank them for their support. Without them, the festival would not exist.

“As with such a large scale event, we’ve got to pull together all the figures. However, we are confident that we’ve raised a significant amount for local good causes and we will announce the final figure when we know.”