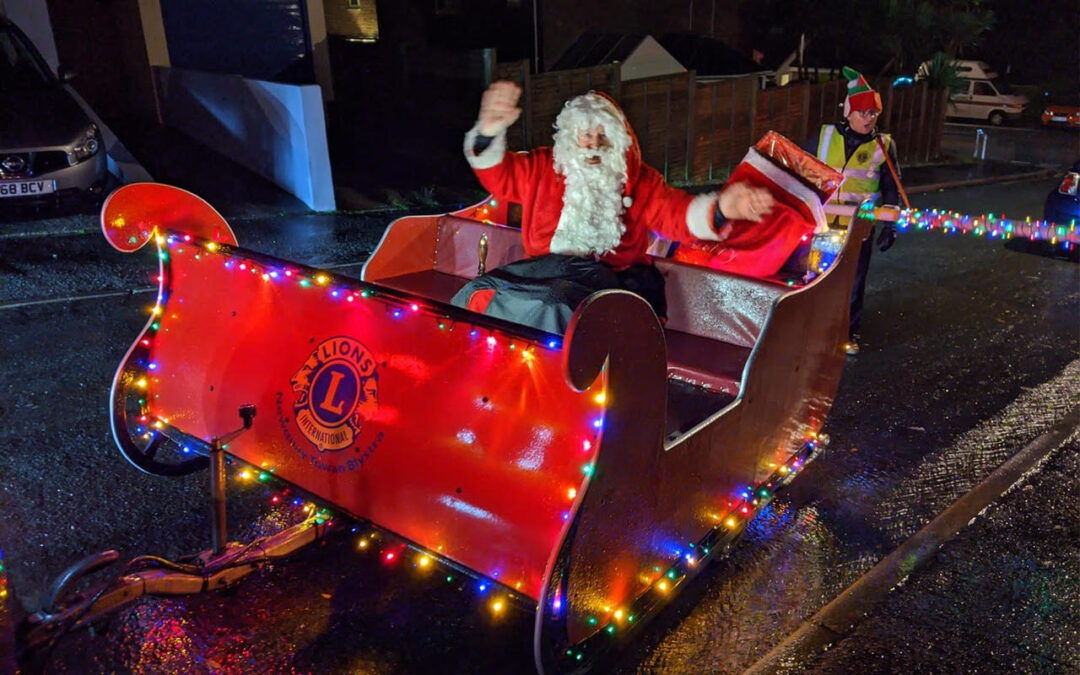 Santa fulfilled his promise to the children of Newquay with the help of members of Newquay Towan Blystra Lions Club when he paraded the streets of the town over twelve nights during December, resulting in many hundreds of smiles, generosity and good cheer from all who came out to see him.

Of course, this was no normal year and it was the first time Santa had embarked on this many nights out with the Lions sleigh since former Lion Andie Barrington-Smith and Lion Jon Collins built it for him a couple of years ago. One big decision which had to be made was whether or not it would be possible to do any sort of collections and maintain appropriate social distancing rules.

The sleigh was not stopping but was accompanied by up to four support Lion Elves for safety and collection purposes and this is when the club’s local design genius, Lion Carl ‘Einstein’ Leadbetter developed a prototype collecting device which the club agreed to use on the sleigh routes. Using a two-metre long drainage pipe, adorned with flashing fairy lights and attached to a collecting bucket, plus carrying straps to assist with the weight and balance, generous Santa fans could put coins in the end of the tube and hear the clunk, clank, bing as they fell cascaded down the pipe into the bucket. A slot in the top of the bucket also meant that anyone kind enough to donate notes could do so as the collector could easily turn the device around to present the bucket to them whilst holding the opposite end of the pipe. Of course, all this ensured a safe distance was maintained but it also caused great fun and amusement to young and old alike.

Lion Phil Bunt, one of the club’s Sleigh Committee said: “This really could not have gone better and everyone really enjoyed the experience, despite some of the evenings we were accompanying Santa being exceptionally wet. In total, we raised over £1,200.

“We have a number of people to thank, who really made this special. So, in addition to Santa, Jon and Carl (who alternated towing the sleigh), Andie and all the sleigh committee, Lions Andy Hannan and Alan Oatey did sterling work as the ‘Elf and Safety’ Lions, guiding the sleigh and scoping the routes. We were joined by virtually all our club members who were available and well enough to assist plus, encouragingly, four prospective Lions as well which is great news.

“Our local radio station, Radio Newquay provided daily Santa updates several times each day and this, linked with the ‘Glimpse’ Santa Tracker phone software and a special URL of www.newquaysanta.com kept everyone up to date as to where Santa was. We are also grateful to Radio Newquay for lending us the audio equipment needed to liven up the streets with some festive music as we went. Our local newspaper, The Newquay Voice provided three-weeks worth of updates as to where Santa would be and we made sure that all messages on our Facebook page were responded to promptly whether they were positive in terms of their comments (which almost all were) or, occasionally, where someone had missed Santa and felt we ought to have done a bit more for them,” concluded Lion Phil.

Lion President, Chris Bernard added his thanks, saying: “It has been a great experience doing Santa in such a difficult year and the generosity of the people we met exceeded our exceptions in these exceptional times. I’m sure we will be offering Santa the chance to do it again and, even though we hope and pray that being two-metres away won’t be something we need to consider in 2021, I think the two-metre tubes might be here to stay after the great reception they received!”