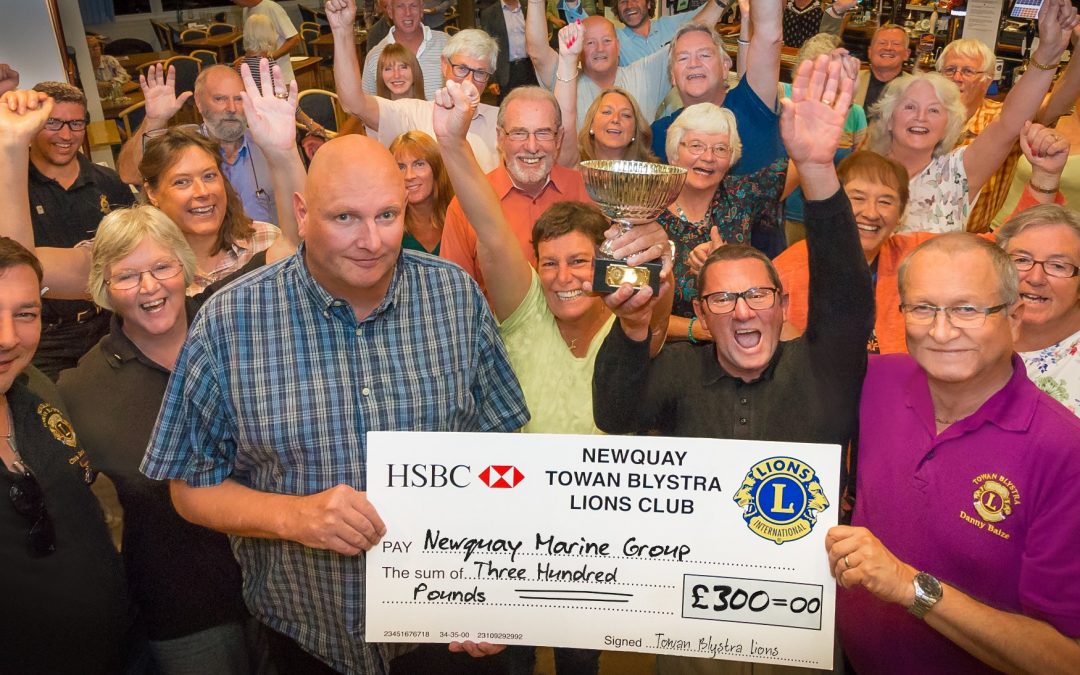 Local charities and good causes are being invited to take part in the annual Brains of Newquay Quiz and potentially win £300 to help fund their efforts, but no one will go away empty-handed.
The event will take place at 7.30pm on Sunday July 8 at Newquay Golf Club and is run by Newquay Towan Blystra Lions Club but spaces are limited to 20 teams of four so pre-booking a spot is essential.
Lions Secretary, Phil Bunt, said: “This will be the sixth Brains of Newquay and the second year we will have run it as a charity charity ‘give away’. In addition to grants we make during the course of the year, funds raised through activities such as our Newquay Beer Festival, Giant Easter Egg raffle and charity collections go towards this prize fund. It’s a fun and different way to support our many worthy local causes.”
Last year’s event was won by Debs Pick, Bob Heath, Tad Dewey and Nic Dewey (pictured with Lion President Danny Baize) who called their team ‘The Dregs of Humanity’ and who collected £300 to support Newquay Marine Group, a community run conservation group that works to protect Newquay’s amazing coastline for the future.
But everyone who took part went away with at least £25 for their chosen cause. Former winning team, ‘Hopelesss Case’ won £125 for the RNLI. Third place was drawn between ‘On the Edge’ who represented St Francis Home for Animals and ‘Four Blokes’ of Newquay Rotary Club, who each won £50, plus, in the case of St Francis Home, an additional £25 for having won one of the quiz rounds.
In total, £795 was given to good causes which, in addition to the winners mentioned included: Newquay in Bloom (£40), Children’s Hospice SW (£25), St Michaels Church fund (£20), Trenance Cottages (£25), St Newlyn East Lights Fund (£20), The Wave Project via Sainsbury’s annual charity (£20), Newquay Surf Life Saving Club (£25), Newquay Lions Club Charity fund (£20), Newquay Mayor’s charity fund (£20) and The Huers Hut and Samaritans (£20).
“Every team which enters is guaranteed at least £25 for their cause,” said Phil.
To enter please either pop into Newquay Golf Club and pick up an entry form or download one here.. There’s a £10 entry fee per team to cover a pasty supper.