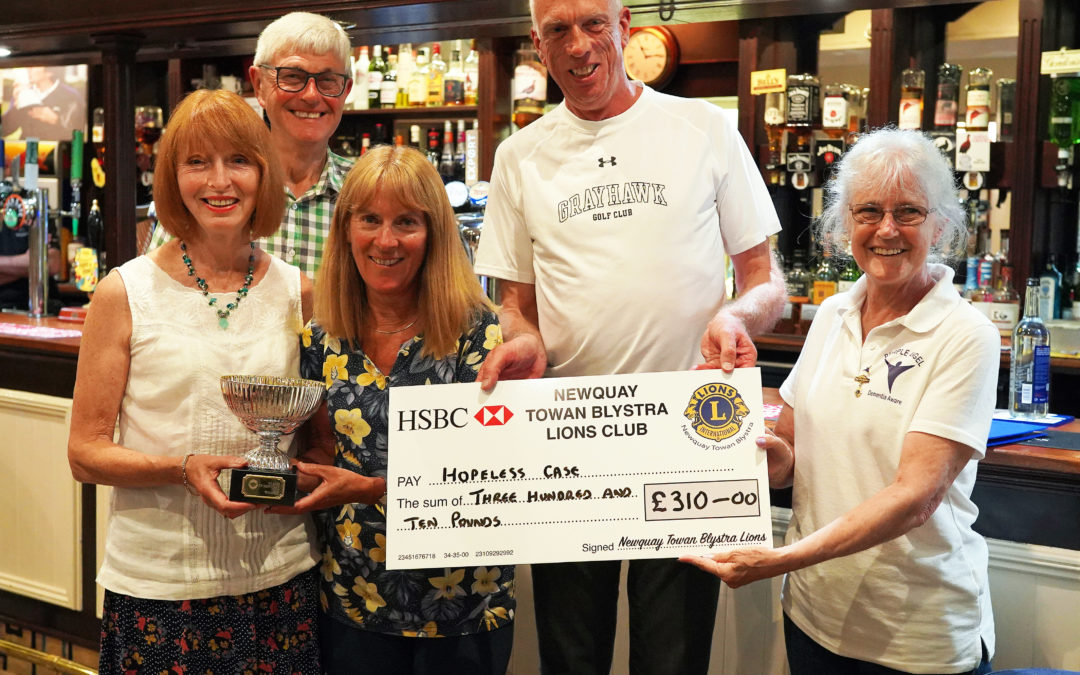 It was another win for a group of local quizzers and also a big win for Newquay RNLI and other charities and good causes at this year’s Brains of Newquay competition, held at Newquay Golf Club.
Last year’s winners, Trevor and Sue Ashton with David and Hilary Payne, quizzing under the team name of ‘Hopeless Case’, won the charity giveaway competition, organised by Newquay Towan Blystra Lions Club, for the second year running and took away the trophy and £310 prize money to go direct to Newquay RNLI.
It was a tightly fought affair with second place team, ‘Three Battys and One Ringer’ being pipped at the post by just one point. However, this still meant that team members Sandra, Peter and Colin Batty, with Colin Martin, won £135 for Bristol Children’s Hospital. In third place were ‘The Old Salts’ – David, Mike, Pat and Claire Salter who won £85 for the NSPCC.
Each year, Towan Blystra Lions use the event as a way of distributing some of the funds they have raised throughout the year at event such as Newquay Beer Festival, the Giant Easter Egg Raffle and various other fund raising projects. In total, 20 teams took part in the annual event at which teams must play to raise funds for a charity or good cause they support. The twist is that everyone is guaranteed to go away a winner as, after prizes for the top three and round winners have been determined, each other team receives £25 for their chosen cause.
The other teams which took part, and the causes they won money for were: ‘Justin’s Mum’ £35 (St Francis Home for Animals), ‘Four Candles’ £35 (Children’s Hospice – Little Harbour), ‘Trivial Per Suitors’ £35 (Cornwall Samaritans), ‘The Woodcox’ £25 (Cornwall Hospice Care), ‘Newquay Rotary’ £25 (Rotary Charitable Causes), ‘Piran’s Angels’ £25 (Piran’s Angels – formerly Street Pastors service), ‘Angels and Demons’ £25 (St Michaels Church), ‘The Odd Trio’ £25 (Lane Theatre), ‘Pentire United’ £25 (Cornwall Air Ambulance), ‘Three Savages and a Dwarf’ £25 (St Francis Home for Animals), ‘Thicker than Plankton’ £25 (Newquay Marine Group), ‘Les Qizerables’ £25 (Newquay Marine Group), ‘The Village Idiots’ £25 (Newquay Lions Charity account), ‘Angels and Sinners’ £25 (Purple Angels).
Quizmaster, Lion Phil Bunt said: “In total, almost £1,000 was given away to these good causes which is exactly what our Lions Club loves to do. We spend so much time every year raising funds for our community and charity accounts and this is made possible by the generosity of the public and the hard work of our members and supporters. Brains of Newquay is the fun part where we see, first hand, members of the community coming together to enjoy an enjoyable evening and, in the process, help some very worthwhile causes.
“We would like to say a big ‘thank you’ to Newquay Golf Club for their support again and to club steward, Alex, for putting the quiz together for us.
Caption (left) Sue Ashton, David and Hilary Payne, Trevor Ashton and, presenting the winners cheque, Newquay Towan Blystra Lions Vice President Lynn Bartrip-Kay – Pic Chris Cox