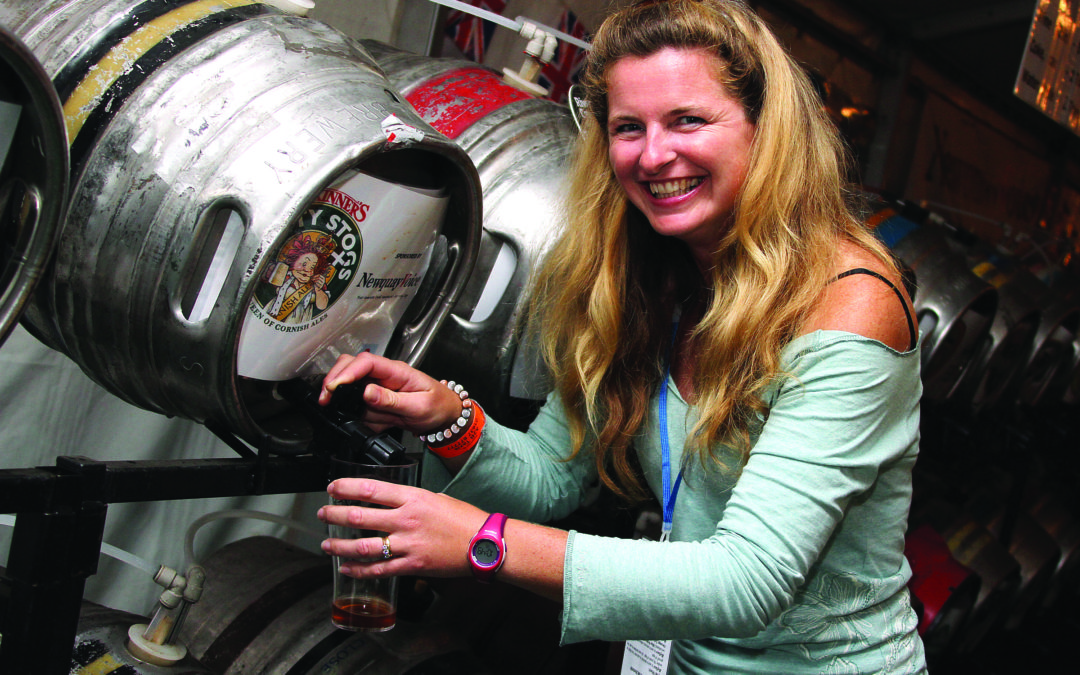 he final planning stages of the seventh Newquay Beer Festival are coming together really well, with over 100 beers and ciders ordered and local musicians confirmed to perform on the two stages over the three day festival from Fri 20 to Sun 22 September at Hendra Holiday Park.
If you are a fan of real ale or cider then you are in for a real treat. On the beers front, old favourites like Sarah Hughes Dark Ruby (5.9%), award winning Timothy Taylor’s Landlord (4.3%), Hunters Full Bore (6.8%) and local favourites from Skinner’s Brewery, Betty Stogs  (4%), Lushingtons (4.2%) and the rugby World Cup offering, Splendid Tackle (4.2%) make welcome appearances. The festival prides itself on bringing new beers to the party and offerings like Donkey’s Bad Ass Blonde (3.8%), Osset White Rat (4%), Hoggs Back Tea (4.2%) and The Electric Bear Brewing Company’s Inspector Remorse (4.7%) are sure to make for some interesting tasting.
For the first year, the ciders on offer have been increased to 50 in total but there’s just a couple of boxes of each so the most popular are likely to sell out before the festival finishes. For those who like their ciders strong then Newquay’s own Bearded Brewery provide the highly popular Tank Slapper (8%) as well as the more conservatively strengthed, but no less interesting Unshaven Maiden (4%). Farmer Jim’s Apple Red needs to be handled carefully at 8.4%, as does Weston’s Old Rosie (7.3%) but with a whole raft of interesting flavours and fruit ciders on the racks, raging from 3.9% upwards, there will be something to suit almost everyone.
To keep everything lively, the ever-popular party band The Qwest will be headlining the Friday night. Saturday night sees the young sensations that are receiving rave reviews and played at last year’s festival headline, Off The Lights. They are a three-piece rockabilly band from Newquay playing 50s and 60s rock n roll which gets everyone up dancing. Keep an eye out for them in the future. Bow River, Emma Chamberlain, Flowers of Palo, Daisy Clark, Paula Marcellis, Jukebox Protocol, Simone Rochelle, Oll and Gwella and Newquay Town Band are amongst the other acts appearing and whether on the big outdoor stage or intimate acoustic stage in the tent, there’s plenty of variety and some good vibes throughout.
You can book tickets for the event in advance (in fact that’s the best value way to do it) with three-day passes costing just £15 online at www.newquaybeerfestival.co.uk where you can also buy tickets for individual days and reserve camping/caravan/motorhome pitches at Hendra’s 5 Star resort from just £7.50 a night per pitch.