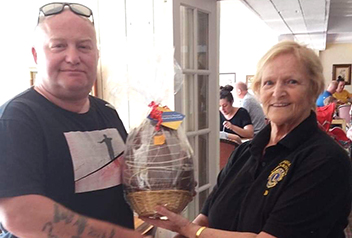 Over £1,000 has been raised for local charities and good causes as a result of the Easter efforts of local pubs and others in selling raffle tickets for ten giant Easter Eggs, provided by Newquay Towan Blystra Lions Club.

During the few weeks leading up to Easter, the eggs, made by Kernow Chocolate, were displayed in various venues around Newquay and the surrounding area and raffled with the proceeds of each being split between a charity chosen by the venue and the Lions Community Fund.

Lion Lesley Baise, who helped organise this year’s raffle said: “We would like to say a huge thank you to all those who took part, without your support we couldn’t do what we do.”